ESLFeaturedTechnology
Home›ESL›How This Teacher’s Influence Reaches Beyond Any Classroom Learn how a teacher can impact a life across the globe.

How This Teacher’s Influence Reaches Beyond Any Classroom Learn how a teacher can impact a life across the globe.

On August 15, 2017, 51Talk brought students from China to New York to compete in an English competition titled: The 51Talk Star Final. The contest was held at the New York Stock Exchange, where 51Talk’s top students gathered to take place in its first annual academic competition. Each student had one or both parents there for support.

Occasionally, a teacher can make an instant connection online with a student. Catherine Smith, an online educator for 51Talk, met a student with whom she connected with immediately.

Smith met Max at the beginning of summer in 2017. She instantly recognized his talent in English. Smith states, “He could take American SAT vocabulary words and produce sentences that were phenomenal. My interest was peaked because it was not often that I encountered students at the age of 10 that were able to meet these academic standards.”

Smith and Max began to have a long dialogue about his future and his past. She learned that his mother and father were professors and that he had indeed lived in America for a short time. She knew Max was ready to supplement his reading, and therefore she began using Newsela to explore his future dream of becoming of a paleontologist.

Smith explains, “I learned he had an advanced understanding of the text, was very curious and wanted to learn as much as he could. Max and I began to work on writing stories together and reading advanced books.” 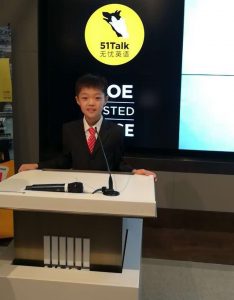 In August, Smith found out that Max was a finalist in the 51Talk English-speaking contest held in America at the NYSE. She was fortunate enough that his mother had worked with him on his speech.

Smith added to supporting his speech and helped Max with pronunciation.

Although Smith was not going to be in NYC on the day of the competition, she had all her students and friends send him well wishes. She sends her students books that she makes every month, and this month she sent Chicka, Chicka Boom Boom, that focuses of the alphabet.

Smith states, “I dedicated this book and the beginning of learning the English language to Max.”

Her entire family including her daughter’s friends came in one night and sang “My Shot,” from Hamilton the Musical to him.

Every night Max and Smith would practice. Their interaction increased his confidence, and Max knew Smith’s family was cheering him on.

“I feel like an extended member of Max’s family, and I often feel that way about many of my regular students. I believe that seeing your students be successful is the greatest gift any teacher can have. I believe that I am slowly showing the staff and management of 51Talk the connection their North American Teachers are making with their students extends outside of the classroom.”

And if you were wondering, Max won the English competition. 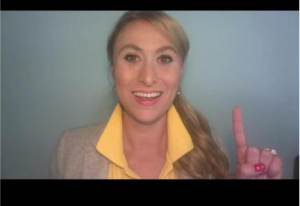 This Is How It Feels To Meet Your Online Students In-Person 51Talk recently hosted an English competition at the NYSE. Heather Penn, an online educator, shares her experience.

4 Ways Teaching Mentors Can Make A Difference Online Or In The Classroom Mentoring is critical for teacher success and best student outcomes.

51Talk Students From China Visit NYSE To Compete In English Competition Meet the families who came to New York, met some of their teachers, and won a grand prize.

How This Teacher Builds A Professional Learning Community Online

A Day In The Life Of A Teacher: A Poem Dedicated To The Teachers And Students For The New School Year

Streamline Academic Efforts For Success-And For Your ...

How Do You Build Cultural Bridges In ...

How This Teacher’s Influence Reaches Beyond Any Classroom Learn how a teacher can impact a life across the globe.">